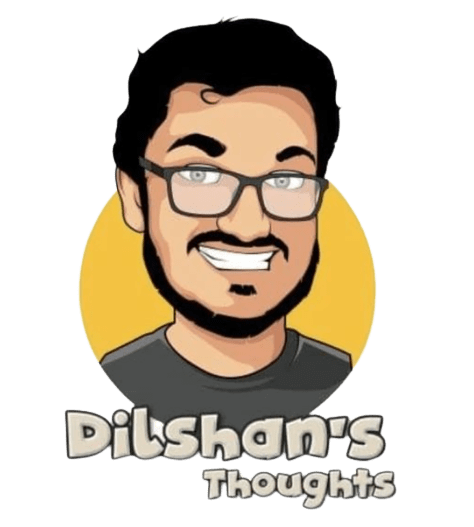 Simply, Dilshan's Thoughts are podcast episodes where I talk about life, the universe, religion, science and tech for hours alone, with my co-host ( from season 2 onwards ) or with a guest.

Since I was a kid, I wanted to question everything and I did. Mind you, early 2000 was a bad era for someone who wants to question religion, ​social system or ethics. When I was a teenager I even argued with Pitiduwe Siridhamma Thero ( I have told stories regarding these conversations on my podcasts ) at his temple.

Around 2011, I got access to the internet and moved on from friends and family to questioning & debunking myths online.
ex: a post I wrote on the Elakiri forum

Then I started Dilshan's Thoughts as a debunking video series on youtube, did around 20 videos but almost all the videos are now unpublished due to the backslash from ​religious extremists and far-left, far-right who even threatened to kill me. One time, a lady even went as far as almost suing me because I presented facts debunking homeopathy.
Also, my way of presenting facts was a bit aggressive too so all and all I thought of just unpublishing the series.

A few years later I found that podcasting is an easy way of approaching an open-minded audience and started the Dilshan's Thoughts podcast series.
Soon it became so famous that so it ranked number #01 on the Sri Lankan podcast charts.

I did a season with just me as the host and from season 2, I asked Chanuka Nadun to be my co-host. Since then we have been dominating the Sri Lankan podcast charts as either #1, #2 or #3 and is among the top 10% most followed podcasts globally & the top 15% most shared globally according to Spotify and Chartable.

Give it a go, you might end up loving me or wanting to kill me.